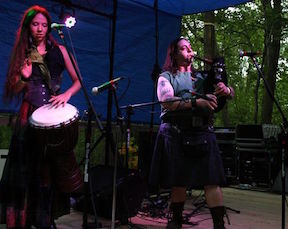 Ashagal (As-Hagal) is derived from two runic letters of the old Norse alphabet.  As and Hagal are associated with Song, Language, History, Birth and Transformation.

Dubbing their sound "Mythic Folk" - Ashagal transports the listener to the realm of dark faerie tales. It seeks to unlock a winding, mist filled path into our tribe's legendary past.

The band was founded in November of 2012 as John and Sierra began to conceptualize a project that would evoke their mutual interest in earth worship, mysticism, natural forces, faerie tale and ancient legend.

They worked together as a duo to write the initial lyrics and tunes. Lucas Mitsch, who was working with John on Medhorn, joined shortly there after.   In October of 2015 after joining the group for several gigs Matt "Cat" Orifice became an official member - bringing a rock and modern folk groove to the tribal sound.

A blend of languages tell tales of an elder world over the sounds of ancient and modern instruments including bagpipes, the hurdy gurdy, electric guitar and a variety of flutes, and tribal drums.  The sound is meant to evoke the ancient world with a dark modern folk esthetic. 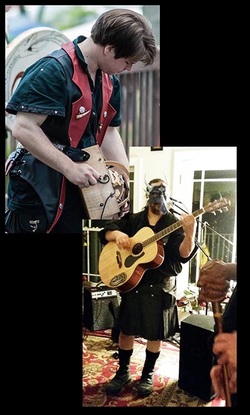 Ashagal fuses their rich textures with original lyrics and compositions. While historically influenced the band also draws upon contemporary music such as rock, gothic and metal.

In 2014 - with the help of a very successful Kickstarter Campaign - the trio completed the 4 month process of recording their first studio album. A Moonlit Path was produced by Redd Sound Studios in Warrington, Pennsylvania and released on April 15. Subsequent events quickly sold out the first run of the album.

Mythic - capturing the metaphorical and literary cycle of legend and cultural identity.

Folk - the lore and sound of the human collective ancestry.

We seek to reveal the threads of these webs and spin them into a musical path for our audience to walk. And while on this adventure our hope is that they may find some part of themself hidden or thought lost.